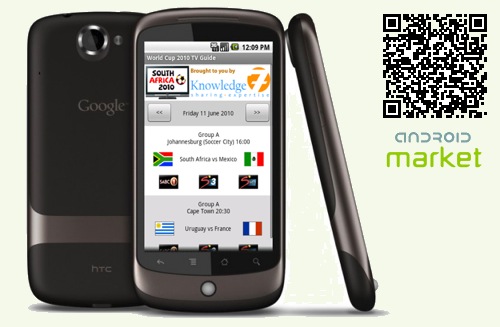 We are proud to announce the launching of our first Android application! Download World Cup 2010 TV Guide or scan the QR code above and get the application for free from the Android market.

The FIFA World Cup 2010 is starting in a few days in South Africa. Use this application to know on which TV channels each match is being shown. Choose among the following countries:

You can browse day by day. Click on the flag of a country will open a browser with the latest information on each team participating in the World Cup (courtesy of Wikipedia.)

This Android mobile application is free and has been developed by Avinash Meetoo, Managing-Director of Knowledge7. To get it, either search for “World Cup 2010 TV Guide” in the Android market or scan the QR code above with your Android barcode scanner.

Developing an Android application is straightforward… if you know Java. Android applications are written using Eclipse and an excellent plugin from Google which allows you to test your app on a virtual Android device as well as your real smartphone (I have a Google Nexus One…)

I spent a few days understanding user interface layouts and how to manage a database but this was time well spent.