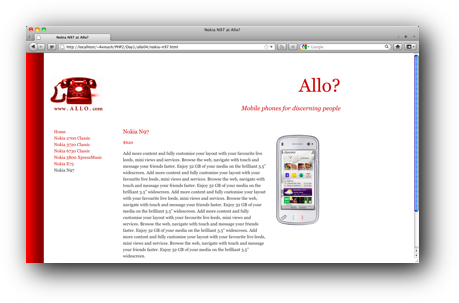 People use HTML and CSS to create web pages. Over the years, a number of good design principles have been identified and, when followed, allow anyone to produce websites which are standards-compliant, compatible with all the major websites yet flexible and easily maintainable.

The work to do is to progressively create a website like the one pictured above using semantic HTML first, then writing CSS “manually” both for formatting and positioning.

Note that web standards are in constant evolution. For example, there is a lot of buzz around HTML5 and CSS3 right now even though the standardisation process is still in progress.