You are here: Home / Topic / Preferences, File System and Menus 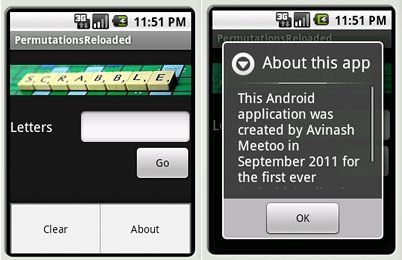 The work to do is to add a menu (also called an options menu) to the PermutationsReloaded application as shown in the picture. Choosing clear will erase everything on screen while choosing about will display a pop-up with some information about the app.

To create the menu, one should build one using the appropriate XML editor and override the onCreateOptionsMenu method of the activity. To handle clicks, the onOptionsItemSelected method will also need to be overriden. 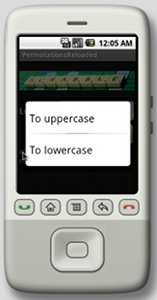 The second step is to add a context menu which opens when one long-presses on any of the permutations. The choices shown are “To uppercase” and “To lowercase” which are explicit enough.

Something noteworthy is that onCreateContextMenu is executed each time a context menu is shown (and not only once) and that one of its parameters is the view on which the long-press has been done. 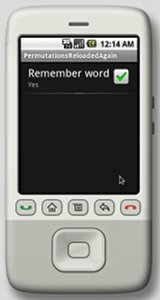 The last enhancement to bring to the application is to allow the user to specify whether the last word entered should be remembered. If yes, the next time the application is started, the word should already appear in the EditText and the permutations shown.

When this activity is launched (using, for example, startActivity), the Android framework will automatically store the preferences.

Finally, the application will have to be updated to store the word entered if the user has chosen to do so as well as restore that word when the application is resumed. The way to do that is to get a SharedPreference object from the PreferenceManager. 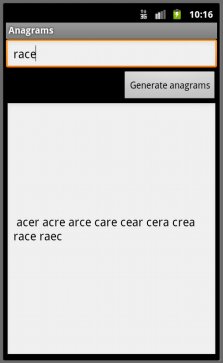