You are here: Home / Topic / App creation and deployment

Android is a software stack for mobile devices that includes an operating system, middleware and key applications. Android is written by Google and most of its source code is released under the Apache license. Version 1.0 of Android was released in September 2008 and the latest version is currently 6.0 Marshmallow powering smartphones and tablets.

There are over one billion active monthly Android users and Android has become the best-selling mobile platform worldwide surpassing iOS (iPhone/iPad), Microsoft, Blackberry and Nokia with ease. 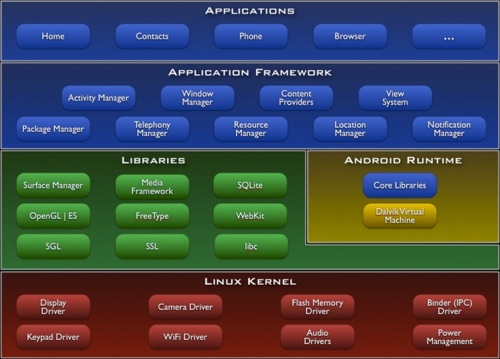 The following needs to be true for someone to be able to develop an Android application:

Java is a powerful programming language which fully supports the object-oriented programming model. A good and free, if somewhat outdated, reference for the language is Thinking in Java (3rd edition) and is available at:

The first application to develop is HelloWorld which should simply display a nice “Hello World!” message when launched. The content of the HelloWorld project as generated by Android Studio should be explored (build.gradle, AndroidManifest.xml, src/main/res/, src/main/java/, etc.) and understood. The HelloWorld app can then be launched on a real Android device to check whether it is working properly.

In Android, apps generally have layouts (screens) which are defined in XML files in src/main/res/layout and behaviour is defined in Java in various files found in src/main/java.

An activity represents a single screen with a user interface. An application can have multiple independent activities.

When an app starts, Android chooses what activity to start initially based on information found in AndroidManifest.xml and ultimately calls its onCreate method. A programmer can specify what the activity should do when it starts by overriding this method.

What Time Is It? 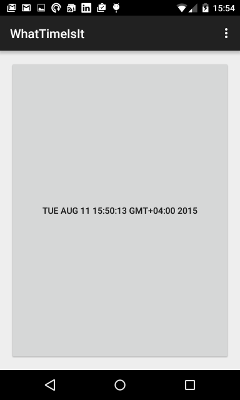 The second application to develop is called What Time Is It. It displays one button which fills in the whole of its activity. When the button is clicked, the text shown in the button will be updated to the current date and time.

The way to do that is to add an Android button to the activity (this can be done by dragging a button to the layout and making it matching the width and height of its parent (i.e. the whole activity)), modify onCreate to make sure that the button shows the current date and time initially and setOnClickListener to update the label to the current date and time each time the button is pressed. The recommended way to do that is to use a Java inner class.